It’s no secret that many flocked to The Royal Hotel this summer. It was the destination to savour the earthiness of chef Albert Ponzo’s Pappardelle with Lamb Neck Ragu and Morels, sip a soft, playful Nebbiolo that teased with the perfect intimation of spice and, of course, admire the away-from-it-all feeling of the compelling surroundings.

“We designed The Royal to be a transporting experience that’s still deeply rooted in the relaxed context of the County,” says Pina Petricone, principal at Giannone Petricone Architects. “Both inside and out, there are elements that were inspired by the 1897-vintage of the grand old hotel, but they’re new, abstract versions that create exciting contrast. In the dining room, for instance, there’s the ceiling’s detailed ‘mushroom’ feature in place of a Victorian ceiling rosette.” 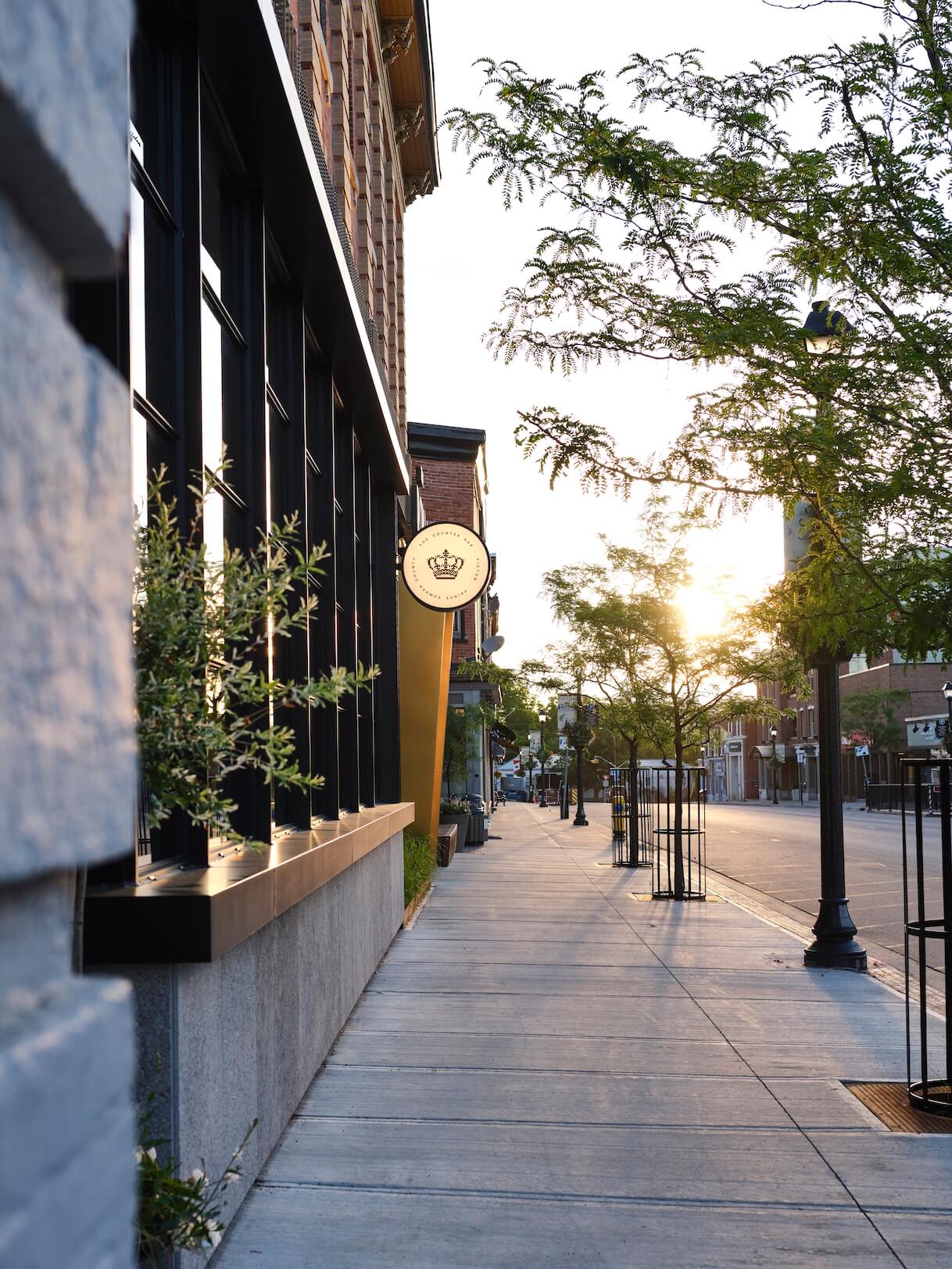 Another savvy design nod to The Royal’s Victorian-era heyday is incorporated into the guest-room vanities, on which scalloped edges reimagine the doilies of that time in a fresh, contemporary way. Thoughtful finishes like these are just one of the ways The Royal has accomplished that hard-to-attain design feat: accommodations that have a distinctive sense of locality but are so well done they transcend place with a sense of timelessness.

The decor is contemporary and comforting: blissful bedrooms are soporific in their serenity—especially those with an in-plain-view tub—and the mosaic-tiled bathrooms make getting ready a jewel-box moment. A carefully considered colour palette affords both old-fashioned charm and modern verve. “The colours of the stitching on the headboards, the powder-coated bedside lamps and the bathroom’s tartan mosaics recall shades found in the original building facade,” says Petricone. “In each guest room, we layered in shades of the original buff brick and the original clay brick with pops of colour.”

The facelift, while carefully considered, was guided by a sense of fun and whimsy. Lobby-washroom mirrors have golden-duck-feet bases; in the parlour, a full bar is hidden in a custom-designed armoire for a cheeky speakeasy feel; and the dining room expands onto a convivial outdoor terrace in warm weather.

And since saying good-bye to warm weather is never easy, The Royal Hotel is taking the sting out of switching seasons. “We love this time of year and we want to extend the experience of enjoying the outdoors for as long as possible,” says General Manager Sol Korngold. And if The Royal’s heated outdoor pool doesn’t convince you to linger alfresco a little longer, then its carefully curated bevy of other warming amenities surely will.

There are integrated design details, such as discreetly built-in patio heaters and a fireplace by the pool (which is open till the end of October), as well as thoughtful accessories like cozy, orange blankets custom-made to match the terrace’s dining chairs. These make for nice outdoor complements to the snug amenities found inside, from communal fireplaces in the lobby’s parlour and library to the many guestrooms fitted with fireplaces and soaker tubs.

Chef Albert Ponzo continues to create pleasure-filled plates, the latest of which round out the warming mix with reliably seasonal, and always delectable, dishes. The deeply comforting mushroom stracciatella (traditional hen’s broth is replaced with an intense mushroom-enriched stock and turnips and kale are added) is unmissable and the kitchen welcomes back one of the crowd-pleasers that appeared on The Royal’s very first dinner menu: silky cappelletti stuffed with just-harvested kabocha squash and served in an obscenely glossy brown-butter and sage sauce.

Most of the ingredients are from the hotel’s nearby 650-acre organic farm, but one – the honey – is from Chef Ponzo’s own. This amber nectar is part of the vinaigrette that’s drizzled on roasted carrots which are finished on a Josper grill for smokiness, then layered with lardo and garnished with fennel pollen. It’s also an integral part of the Seadas, a classic sweet and savoury Sardinian dessert of sheep’s milk-stuffed ravioli that’s fried to a delicate crisp and blanketed in honey. And the sweet appeal of The Royal is getting even more inviting. “Until now, our gym was for guests only,” says Korngold. “Now, we’re offering a new day pass, for locals or visitors, so they can workout, have a sauna and hang out on the terrace or by the Parlour’s fireplace to really savour the last days of fall.”

Where tastemakers go to find the best Icewine

Where tastemakers go to find the best Icewine

You'll find some of the world's best Icewines in Canada's Niagara region.

From beach bbqs to a Michelin-star chef, the Cayman Islands has a culinary scene for every

From traditional street food to award-winning cocktail bars, these culinary treasures in Oaxaca can’t be

Here are all the eateries deemed the best of the best for 2022.

This family-owned boutique winery has it all, from seaside views to the perfect tasting menu.