Every herbivore knows that summer barbecues can be a dicey affair. A good host is considerate of their guests’ dietary preferences, but there’s always a chance of your meal being confined to the potato salad bowl.

These days, the issue isn’t so much a lack of available options in grocery stores. Plant-based “meat” is easy to find, but the variations are extensive and can be difficult to navigate for meat eaters who aren’t familiar with the differences between meat alternatives or their own preferences yet.

There’s been some skepticism about whether or not vegan meat measures up to the real thing. Kim Kardashian, newly-appointed Chief Taste Consultant for Beyond Meat, recently posted footage online proving that she actually ate the products she was advertising after eagle-eyed fan theories that she faked chewing them in her Instagram promo picked up steam.

The question of what constitutes a burger has been heavily discussed. Is a burger a sandwich? Does a burger need to have a patty, or just something on a hamburger bun? These questions are the stuff of playful internet debates, but the controversies around burgers go back farther than you may think.

Earlier this year, the CBC’s viral documentary Patty vs. Patty told the story of Toronto’s 1985 “Patty Wars” between Jamaican patty sellers and Canada’s meat regulators. The battle was over the (surprisingly complex) criteria required for something to be legally classified as a beef patty. There was a summit and ultimately peaceful resolution, but amateur culinary philosophers continue to debate over burger classification and etiquette to this day. In other words, veggie options have their work cut out for them if they want validation from this industry’s tastemakers.

As for logistics, plant-based burgers fall into two main categories: ones that mimic the taste and texture of meat and ones that don’t. All are designed to be eaten on hamburger buns with traditional condiments like ketchup and relish, but many emphasize the flavours of the vegetables or legumes they’re made of (mushrooms, beans, and kale are a few common ones). Soybeans and tofu, as well as grains, are standard ingredients to bind the mixtures together into workable burger patties.

These days, though, it’s all about impersonation. Big Veggie Meat is focused on breaking into the carnivore’s market and providing plant-based protein options that meat eaters will also want to buy, without necessarily having the goal of going vegetarian. It’s not just about making money – plant-based protein is better for the environment and can be more nutritious than real meat.

If you’re packing up the picnic basket or lighting the grill, these imitation-beef options are sure to start a sizzle.

Our top five “we can’t believe it’s not beef” burgers: 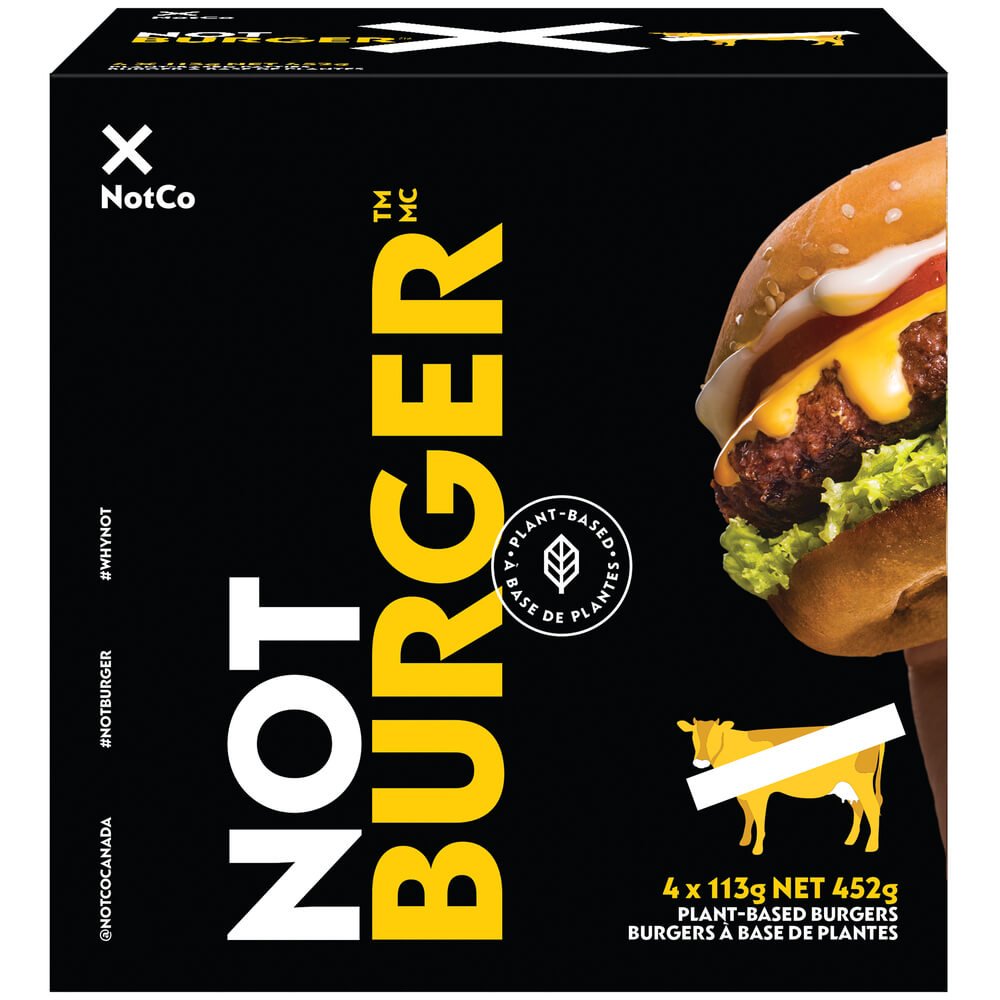 Lab-made meat is a pretty futuristic concept in general, and the team at NotCo is on the cutting edge of exploring the new frontier. Their formulas are created with the help of Giuseppe, an artificial intelligence program which analyzes animal products at a molecular level in order to recreate their taste with plant compounds. If you’ve ever wondered how Iron Man’s automated assistant Jarvis would fare in the vegan culinary sphere (arguably a more contentious battleground than anything the Avengers have seen) now’s your chance to find out.

NotCo is widely known for their signature product NotMilk, which is renowned for its frothiness and dairy-like taste. Like the NotBurgers, no one plant substitute makes up the formula – instead, Giuseppe chooses an array of ingredients and combination formulas that are then refined. The company doesn’t have a cheese substitute yet, but their prowess with plant milk bodes well for cheeseburger lovers.

$13 for four at select grocery stores 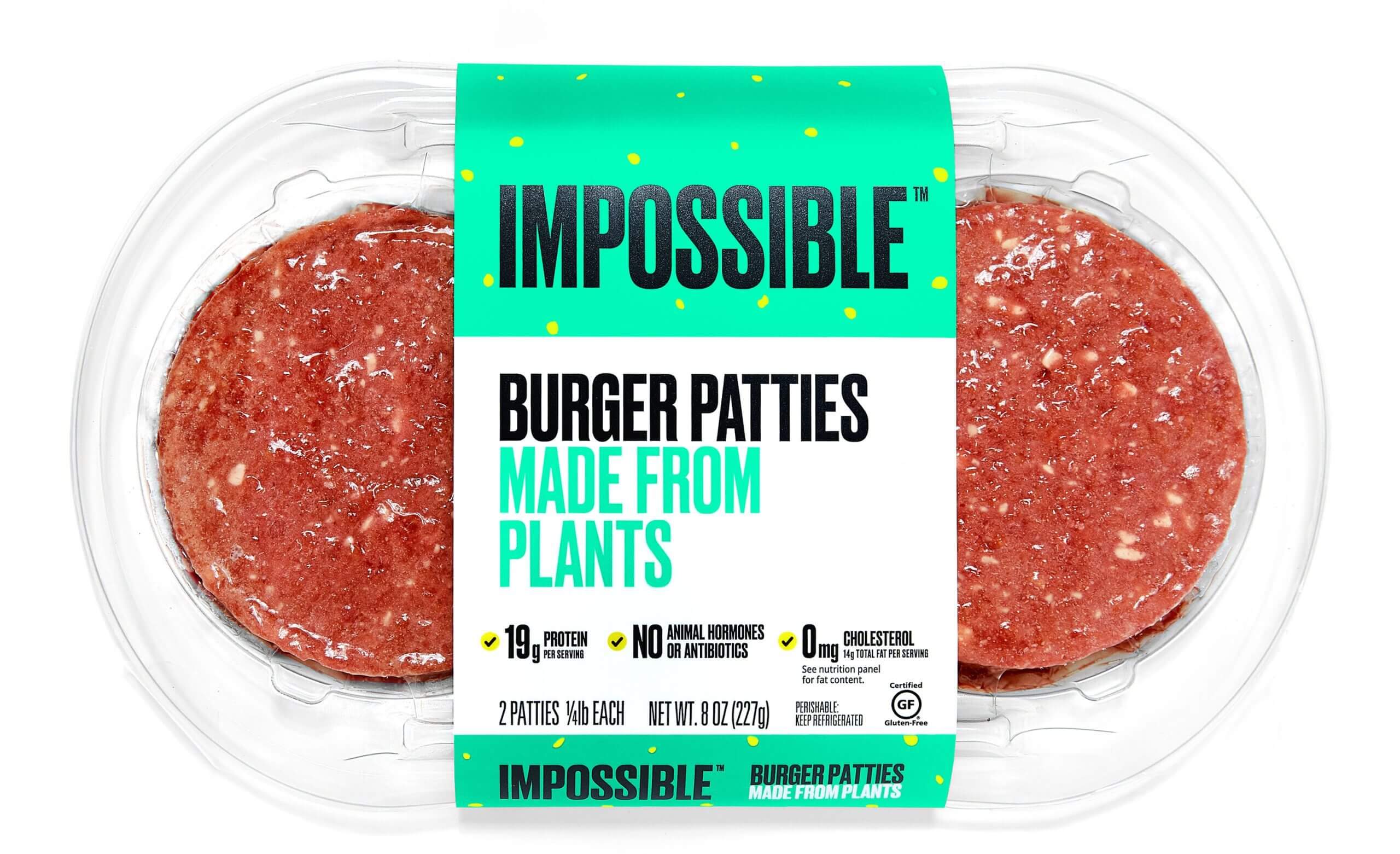 Beyond Meat is often credited for taking vegan protein mainstream, but Impossible Foods was making waves in the fast food scene years before the new kid on the burger block arrived. Their partnership with Burger King was one of the first of its kind, paving the way for other partnerships between plant-based meat producers and restaurants of all sophistication levels.

The Impossible Burgers are made of soy and potato protein, but its secret ingredient is called “heme:” a lab-made product that gives the burgers their convincing and meaty-tasting juice and appearance. The fake “bleed” is pretty convincing and the plant-based fats and oils give the patties that just-greasy-enough texture necessary for a great burger. Many veggie burgers go for a healthier nutritional buildup, but Impossible Burgers is a traditional cheat meal-style burger – the sodium and fat content is pretty high, but even health nuts can appreciate the occasional indulgence.

$9 for two from Voilà by Sobeys 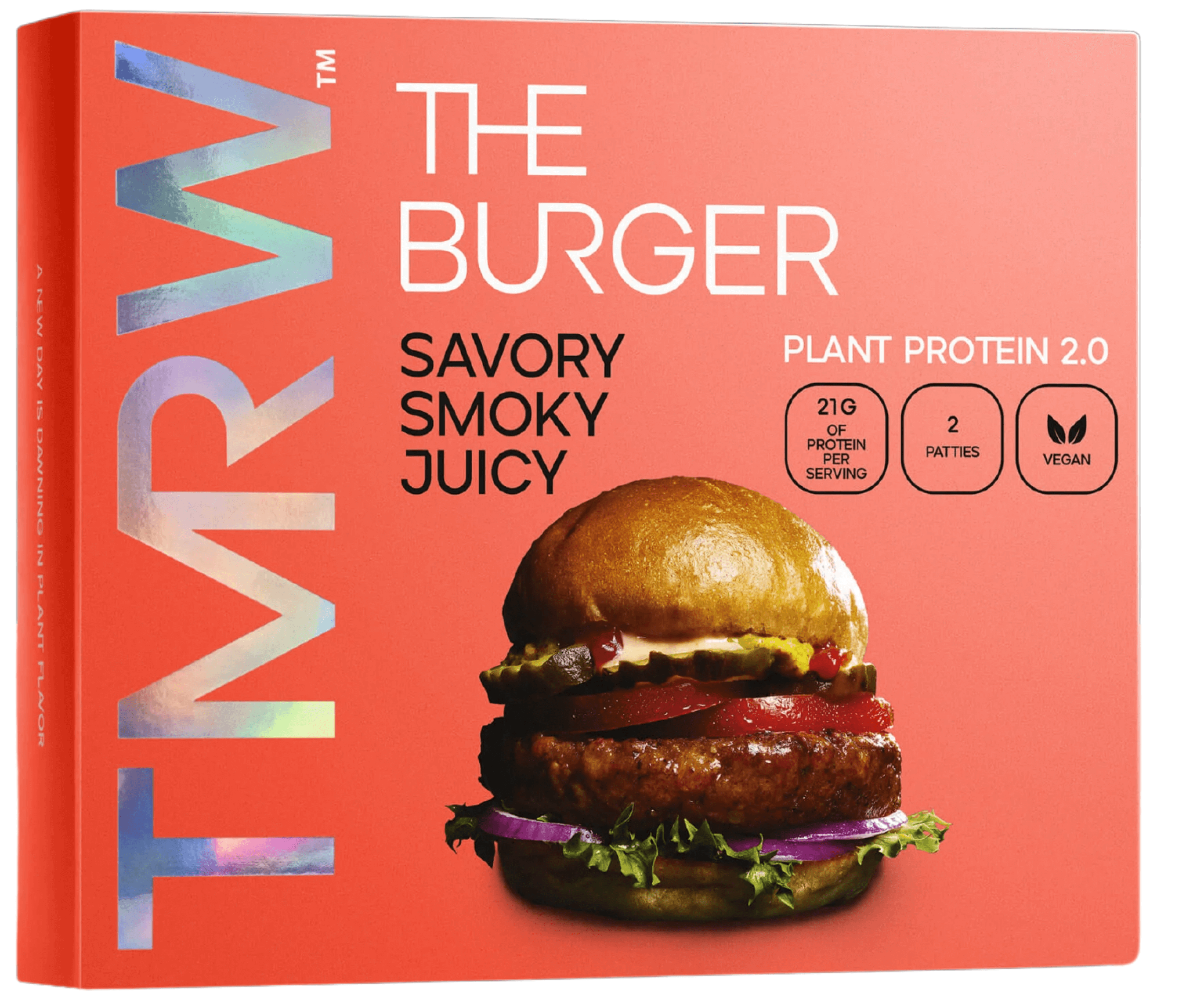 Elon Musk might have big plans to colonize Mars, but what will the pioneers of tomorrow eat? BC-based TMRW Foods is on a mission of its own, and took to Instagram with a proposition for the SpaceX CEO: TMRW Mars ration packs, packed with protein from peas, quinoa, and other sustainable nutrients. And, of course, the company’s signature black-and-pink branding, which adorns everything the self-proclaimed “Willy Wonka of Plants” touches.

TMRW’s proprietary protein formula is made up of a range of ingredients derived from whole and nutritious foods, like kidney beans, quinoa and sunflower seeds. The patties are similar in texture and grilling style to beef, which helps to give them the charred look and feel of meat-based patties. The mince which makes up the base can be purchased individually, if you want to make your own patties or try it as a substitute for other ground beef recipes. 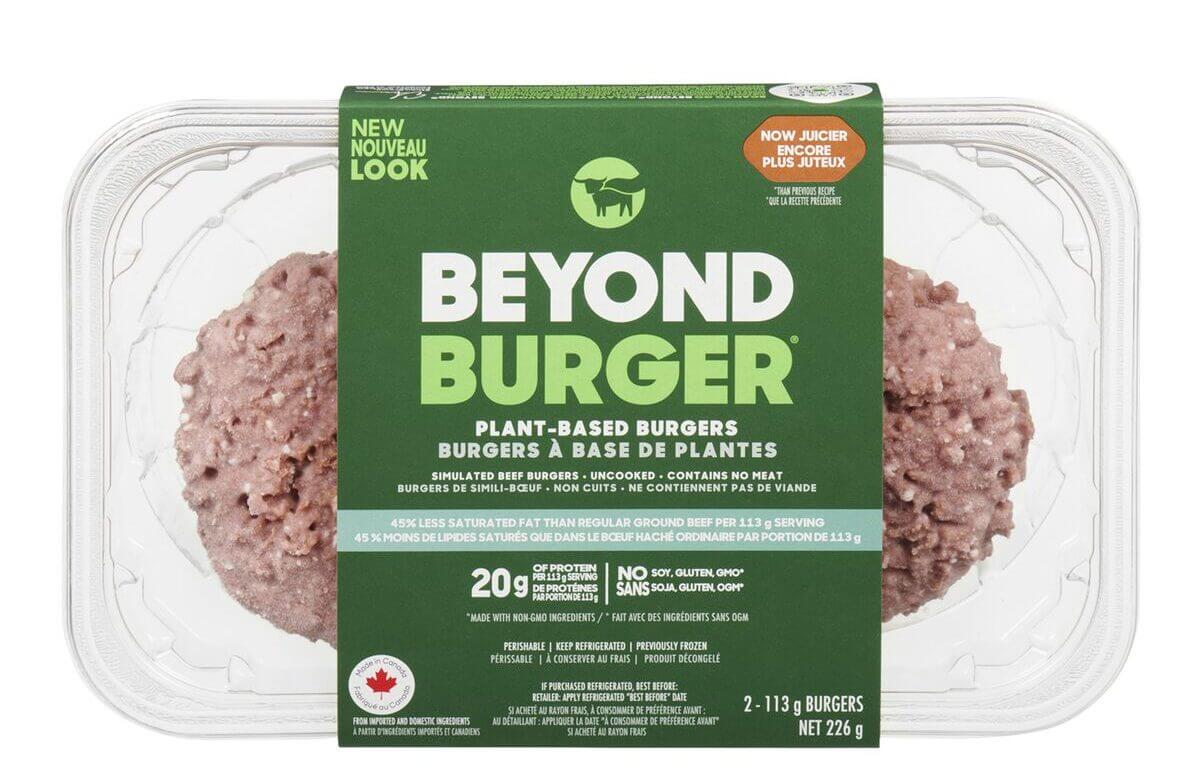 Beyond Meat has only been a household name for a few years, but its debut in restaurants, grocery stores, and meal kit delivery services in the late 2010s was a huge splash. The pandemic was an uncertain time for some food industries, but patio season is in full swing for 2022 and Beyond Meat is back on the menu.

Kim might have come through with the receipts on her own taste test, but you won’t have to: the formula speaks for itself, and the company’s environmentally-conscious ethos remains central. The primary ingredient is pea protein and the juiciness is beet-based, with coconut oil and cocoa butter providing the visible fat bits distributed through the patties. If you’re unsure about preparing it, Beyond has partnerships with a number of meal kit delivery services such as Hello Fresh, which can help newbies start to get familiar with preparing meat alternatives. Their California Cookout Classic Burger recipe is on our menu this summer. 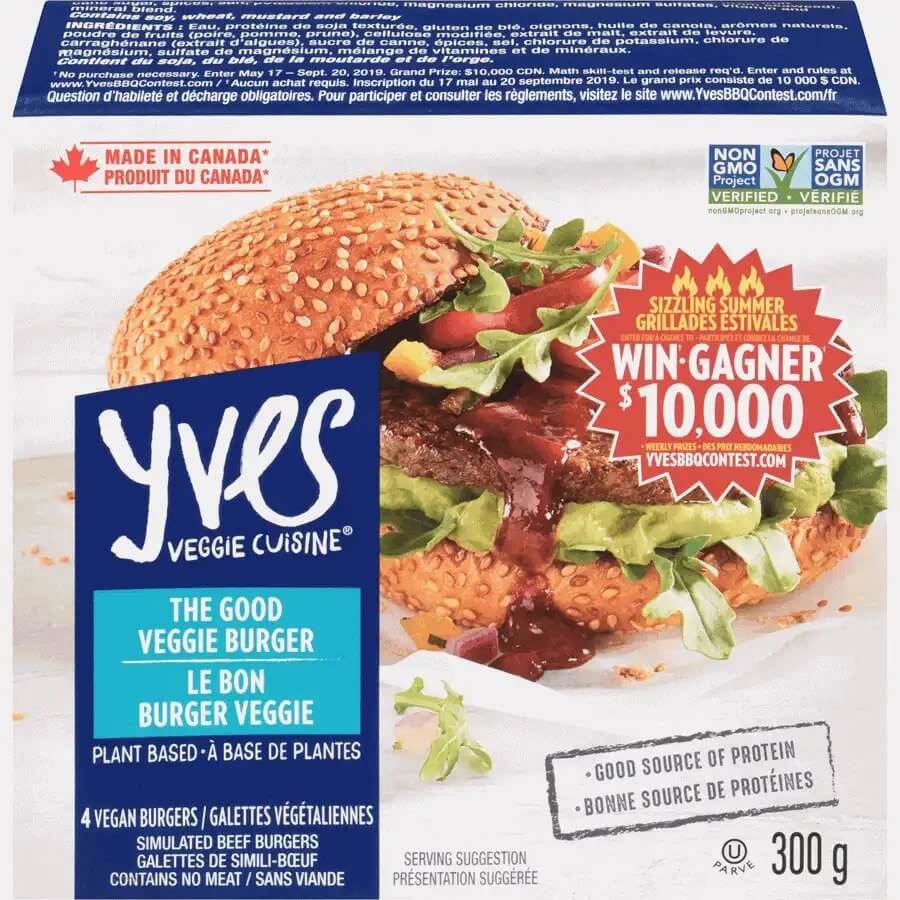 You’d be hard-pressed to find a Canadian vegetarian who isn’t familiar with Yves. Unlike the other fresh-faced favourites on this list, Yves has been on grocery store shelves for over 20 years and makes a wide range of meat substitutes beyond burgers. You can find them in almost all Canadian chain grocery stores and delivery services.

Yves makes a couple of veggie burger patties, but The Good Veggie Burgers are the closest in taste and grill-ability to beef. They’re affordable and usual crowd-pleasers, so they’re a good option if you’re not sure who all you’re grilling for and want to cover all your bases. They’re also healthier than many imitation meats – at only 100 calories per patty, they make a tasty burger base if you’re looking to keep it basic, but they’re also the perfect canvas if you like to load up on the cheese and spreads.

It’s true, there IS a sriracha shortage on the horizon

And they're all at Toronto's One Of A Kind Show.

Three exceptional women are shaping the wines and business of California's Wente Vineyards, from vine to

The future of local food delivery might be home-grown and high-tech.