Filet Mignon is seasoned with Togarashi (a Japanese spice blend with a kick consisting of – among other things – chili flakes, sesame seeds and seaweed) then seared until medium-rare. Serve sliced steak on a bed of soba noodles, shredded bok choy, assorted greens and edamame. Drizzle with Kewpie Toasted-Sesame Dressing (a creamy Japanese dressing mainstay) and top with a sprinkling of with black and white sesame seeds.

The salad recipe is for one serving, but there is enough Seared Filet Mignon and Kewpie Toasted-Sesame Dressing for four servings. 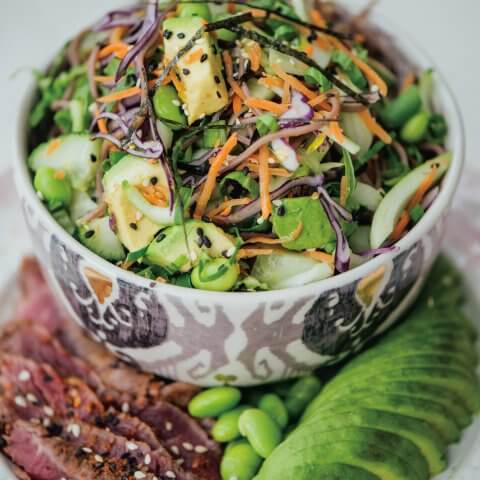 This roasted cauliflower vegetarian main is a lot of things: Middle Eastern-ish, easy to make and